THE DEAD SEA SCROLLS (THE DISCOVERY HEARD AROUND THE WORLD)

Enjoy having everything you need to know about the Dead Sea Scrolls in an ultra-slimline, laminated pamphlet at your fingertips! The Dead Sea Scrolls Pamphlet examines the incredible discovery of the oldest known copies of portions of the Old Testament and is packed with key features such as:

Perfect for individual or group use. 12 panels, fits inside most Bibles, 8.5 x 5.5 inches, unfolds to 38 inches long.

The Dead Sea Scrolls confirm the accuracy of modern Bible translations, but what were they doing hidden in caves in Qumran? Who were the people who hid them there? What do these scrolls reveal about Jewish history, the Old and New Testaments and early Christianity? Find the answers to these questions and more in this high-gloss, fold-out pamphlet that reveals:

The Dead Sea Scrolls pamphlet is packed with engaging information, including:

This Biggest Myth About the Dead Sea Scrolls

Some people misunderstand the Scrolls and make the mistake of believing that these are the originals of the Bible. This Dead Sea Scroll guide gives a more accurate picture of this important archaeological find. Includes insights on the Isaiah Scroll and other key discoveries. The pamphlet delves into the people who possessed the scrolls, the "Dead Sea Sect." In addition to leaving the scrolls with biblical passages in clay pots under floors and in caves, the sect also left a variety of other writings including their religious rituals, marriage contracts, and predictions of future events, among other documents. 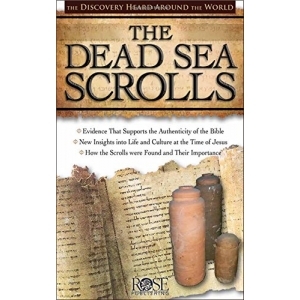