CONTENDING FOR THE FAITH, An Updated History of the Baptist, by Robert Ashcraft

Join author Robert Ashcraft on a journey through Baptist history beginning with the ministry of Jesus in Contending for the Faith, An Updated History of the Baptists. 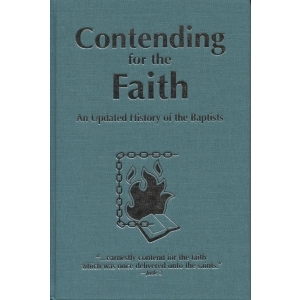 The question of Baptist origins often has precipitated controversy among Baptists. Confusion has been intensified because proposed solutions of the problem have occasionally radically modified and influenced Baptist ecclesiology.

Chapter one of Contending for the Faith is titled “Essentials of ‘the Faith’ in the Early Churches.” This chapter identified six essentials of the faith. The subsequent chapters of this book identify these threads of the faith as they are interwoven into and preserved by different groups of Christians throughout the respective periods of church history.  (hardback)