A HISTORY OF THE BAPTISTS Volume 1 by John T Christian

A complete and accurate history of the origin and continuity of New Testament churches until they were firmly planted on the North American continent. A true Baptist history, unmarred by the current trend of Protestant thought coloring so many Baptist histories. Volume 1 of two volumes. (hardback) 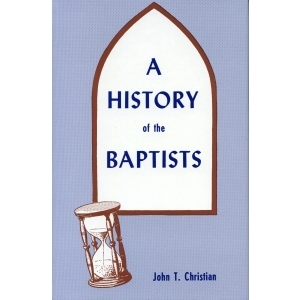 John T. Christian takes readers down a two-volume journey through somewhat dark history of Baptists. We are far removed from many of the circumstances from times past. The representation of the Baptists was often made by enemies who did not scruple, when such a course suited their purpose, to blacken character. Often, because of persecution, Baptists were far more interested in hiding than they were in giving an account of themselves of their whereabouts.

Chapters from Volume 1 include:

The Struggle Against Corruption

The Paulician and Bogomil Churches

The Origin of the Anabaptist Churches

The Character of the Anabaptists

The Reformers Bear Witness to the Baptists

The Baptists in the Practice of Dipping

Other Baptist Churches in the Practice of Dipping

The Practice of Dipping in the Netherlands, Poland, Lithuania and Transylvania Baptist Churches

The Peasant Wars and the Kingdom of Muenster

The Baptists in Reformation Period in England

The Episode of John Smyth

Origin of the Particular Baptist Churches

A Great Debate on Baptism

The Rise and Progress of Baptist Institutions and Customs

The Achievements of the English Baptists

The Origin of the American Baptist Churches