THE TRINITY: WHAT IS THE TRINITY AND WHAT DO CHRISTIANS BELIEVE? PAMPHLET

The Trinity is one of the most basic doctrines in Christianity—and one of the key doctrines that separates Christianity from other religions. This glossy full color pamphlet on The Trinity explains the Trinity in clear easy-to-understand terms and illustrations.. The Trinity gives dozens of Scriptures and background documentation that supports the belief that the Father, Son, and Holy Spirit are all God, not three names for the same Person. This bestseller also answers misunderstandings that cults and other religions may have. Size: 8.5"x 5.5" unfolds to 33" long. Fits inside most Bible covers.
The Trinity pamphlet helps believers know what they believe and why they believe it about this critical Christian doctrine. In 12-panels of rich, well-research information, the pamphlet addresses topics such as:

The pamphlet provides interesting facts about the history of the Trinity, for example:

It’s probably not surprising that a doctrine that’s as critical as the Trinity is at the center of numerous misunderstandings. For instance, God is not, 1+1+1=3; God is 1x1x1=1.  The Trinity pamphlet addresses six of the most common Trinity misunderstandings:

The Trinity pamphlet reveals how early Christians addressed these misunderstandings through some of the earliest statements of faith including:

The pamphlet includes the full text of each of these four creeds.   One of the most powerful sections of the pamphlet includes a chart that shows that God and Jesus Christ share10 key traits that are mentioned in the Old Testament as applying to no-one but God. Another chart shows seven Divine attributes shared by Father, Son and Holy Spirit with Scripture references for each. 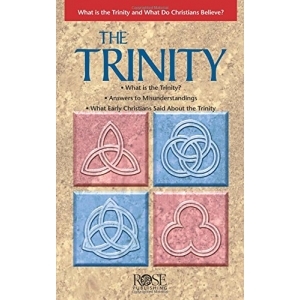