THE WORD OF GOD IN ENGLISH, CRITERIA FOR EXCELLENCE IN BIBLE TRANSLATION by Leland Ryken

With so many Bible translations available, how do you make a choice between them? How do you even know what the criteria should be for making a choice?

As an expert in English literature and literary theory, Leland Ryken approaches the translation debate from a practical artistic viewpoint. He believes that many modern translations take liberties with the biblical text that would not be allowed with any other type of literary work. Also, what readers are presented with as biblical text is actually far from the original text. In literature, a simplified version of Milton's work is not Milton, and neither is an edition written in contemporary English. Anyone who is interested in Milton would find any version that changes his words unacceptable for serious study. Ryken argues that the same dedication to reproducing literature texts as closely as possible needs to be present in biblical translation. To do so, it is necessary to take into account the difficulty of working with original languages. Only an essentially literal, "word for word" translation of the Bible can achieve sufficiently high standards in terms of literary criteria and fidelity to the original text.

Ryken does not contest that many modern translations have been used for good, and believes that there is a place for a range of Bible translations, including children's Bibles and Bible paraphrases. His purpose is not to say that the only Bible available should be one that is essentially literal. Instead, he defines the translation theory and principles that would result in the best Bible for English-speaking people and serious students of the Bible, and also for the English-speaking church as a whole. He believes that an essentially literal translation is the natural result of following these principles.

Along with a short history of translation, Ryken evaluates presuppositions that impact translation theory. He also examines fallacies about the Bible, translations in general, and Bible readers that influence what translation decisions are made. Believing that those who undertake the serious work of translating God's Word have an obligation both to God and to others, he assesses the theological, ethical, and hermeneutical issues involved and surveys difficulties with modern translations. Ryken's literary expertise gives him the perspective needed to provide Christians with a standard for comparing contemporary Bible translations, as well as an understanding of why some translations may not convey the very words of God. 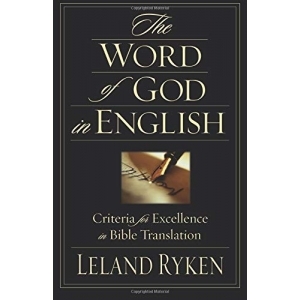